As of July 24, 49 Parties have presented their “intended Nationally Determined Contributions” or INDCs.

The INDCs are the climate change pledges that all Parties to the UNFCCC are making, in advance of the 21stConference of the Parties (COP21) in Paris.  Countries agreed at COP19 (2013) to present them in advance of COP21 (December 2015).

As such, they are a way to operationalize what academics had determined to be the best cooperative solution in a game theory approach to climate change negotiations.

For example, Peter Wood, in a 2010 research report on “Climate Change and Game Theory” (https://goo.gl/CP0yAl), concluded the following:

“In its simplest form, climate change mitigation is a prisoner’s dilemma. The prisoner’s dilemma has a Nash equilibrium that involves players acting non-cooperatively in a manner that is socially sub-optimal. When countries have a continuous choice about how much to pollute, the Nash equilibrium involves much more pollution than is optimal … There are several strong results about mechanisms that implement a cooperative outcome via subgame perfect equilibrium when there is a social dilemma. These include subscription games (Example 4.2), bargaining based on confirmed proposals (Example 4.3), and approaches where countries ‘match’ each other’s pollution abatement commitments (Example 4.4)… This suggests that when countries are willing to increase their emission reduction commitment if others do the same, cooperation is more likely. It also suggests that cooperation would be more likely if an international mechanism were to exist that would allow countries to make a binding conditional commitment”

In other words, the cooperation will be more likely if there were an international mechanism to allow countries to propose a “binding conditional commitment”, and have other countries “match” these commitments.

This is basically how the INDCs were designed, and how they have been working thus far.  As of July 24, 21 INDCs have been submitted (representing 49 Parties, as the EU includes its 28 Member States), which include 56.3 % of total emissions.  Of major emitters, China, the United States, the European Union, Russia, Japan, Mexico, Canada, and South Korea have already presented their INDCs.  Still missing among major emitters:  Australia, India, Brazil, Indonesia, Iran, Saudi Arabia, South Africa, Turkey, Ukraine and Thailand.  Among Developing Countries, the following have already presented their INDCs:  China, Ethiopia, Gabon, Kenya, Marshall Islands, Mexico, Morocco and Singapore.  Of these, the Marshall Islands is the first and so far only developing country with an absolute emissions reduction target, meaning its emissions have already peaked and the country will now continue to reduce emissions.  This is of huge significance, as this type of mitigation goal has traditionally only been utilized by developed “Annex I” countries.

AILAC member countries have reaffirmed their commitment to present theirs before October, in time for the compilation by the Secretariat (http://goo.gl/6YRoYY).  The President of Colombia, Juan Manuel Santos, announced to the country’s Congress that emissions would be reduced 20 % by 2030.

The following graph, developed by the World Resources Institute (WRI) illustrate the top 18 emitters, highlighting in particular the top 10 (and which sectors are involved). 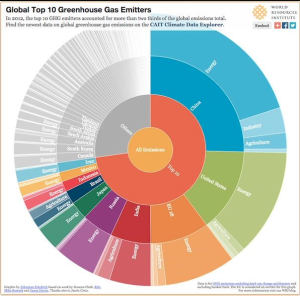 The different mitigation pledges are difficult to compare, as they use different base years, different target years, and in some cases are not quantified economy-wide emission reduction targets, but rather deviation from “business as usual” baseline projections, or carbon intensity targets (reducing the CO2 emissions per unit of GDP).

Russia proposed a 25-30 % reduction from 1990 to 2030; however, since emissions fell after 1990 (after the collapse of the Soviet Union), this in fact could imply an increase of 41 % in emissions between 2012 and 2030.  This is an example of how the way that pledges are formulated can actually imply an overall increase in emissions, rather than a reduction

World Resources Institute (WRI) has estimated that the INDC pledges represent an annual reduction of -2.8 % in GHG for the European Union and the United States; -2.3 % per year for Japan; and -1.7 % for Canada (http://goo.gl/lRgV5W). 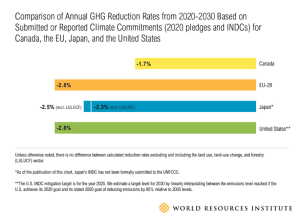 Climate Action Tracker (CAT, http://goo.gl/XXEp4c), a group of climate scientists and policy experts, considers that the following INDCs are “inadequate” towards meeting the 2 degree C temperature increase limit: Canada, Japan, New Zealand, Russia, and South Korea; it gave China’s carbon intensity target an “inadequate” classification, whereas it gives a “medium” rating to its national policies and actions, including the increase of its non-fossil fuel share of primary energy to 20 %.

According to CAT (http://goo.gl/lNSHzr), “Current policies place the world on a path towards 3.6 to 4.2°C warming above pre-industrial levels, whereas the unconditional pledges or promises that governments have made, as of early 2015, would limit warming to 2.9 to 3.1°C above pre-industrial levels. In other words, there is still a substantial gap between what governments have promised to do and the total level of actions they have undertaken to date. Both the current policy and pledge trajectories lie well above emissions pathways consistent with a 1.5°C or 2°C world.”

It is not clear how the “intended” contributions would be strengthened to close the “ambition gap”. Some Parties (including AILAC) had proposed a robust ex-ante assessment process, but Parties were only able to agree to let the Secretariat of the UNFCCC carry out a synthesis report of the aggregate effect of the INDCs, which is due to be published by November 1st. There will also be an informal review in Morocco.

The UN’s Intergovernmental Panel on Climate Change (IPCC) in its Fifth Assessment Report (AR5) estimated that a 40 to 70% GHG emissions reductions is required by 2050 compared to 2010, and net emissions levels near zero or below in 2100, in order to keep the temperature increase under 2 degrees (http://goo.gl/b63SI9).

As major developed countries are reducing emissions, some major emitters in the developing world are continuing to increase theirs.  India has not yet announced a “peaking year”, citing economic growth and development imperatives.

In any case, however the INDCs are “finalized” and the commitments are established, they will need to be an integral part of the legally binding agreement to be adopted in Paris at CoP21.  There must be a strong legal obligation to implement and achieve the targets set out in the national commitment documents. This, regardless of where the commitments end up being captured, whether it be an annex, schedule or an online registry, as Parties have suggested.

The fact that there are already many INDCs on the table has given both national governments and non-state actors a reason to be optimistic for the Paris outcome.  But the biggest and most important decision is yet to come: a legal agreement that makes these INDCs binding is the best way to enhance trust and confidence in the multilateral process.

According to the C2ES executive vice-president, Elliot Diringer, “I see far greater convergence on the broad outlines of the deal than we ever saw in the time preceding Copenhagen.” C2ES conducted a year-long consultation with climate negotiators from more than 20 countries.

Laurence Tubiana, France’s chief climate envoy, indicates that “This is a very new thing,” she said. “This is a process where countries progressively do more and more over time. This is a long and deep transformational process that will extend over the next 40 to 50 years and beyond. We need a clear framework of rules to do that.” (http://goo.gl/s08s47).

Christiana Figueres, Executive Secretary of the UNFCCC, is confident that CoP21 will deliver on its target to agree on action to limit global warming to 2C. “The stars are aligning towards a Paris agreement that will establish a pathway that keeps us within the limit of 2C. What is unique here is that everyone is realizing that this truly is a very, very urgent moment in the history of addressing climate change. That this is a moment we cannot afford to miss. And because everybody is mobilized in the same direction, we actually have a very good chance of doing something meaningful.” (http://goo.gl/n3apmE).

One of the linchpins in achieving an ambitious and effective outcome in Paris is climate finance. The provision of climate finance to developing countries will be indispensable to achieve the emissions reduction that is required, and also to build trust in order to conclude a successful agreement in Paris.

According to the IPCC AR5, “For mitigation scenarios that stabilize concentrations (without overshoot) in the range of 430 to 530 ppm CO2-eq by 210019, annual investments in low carbon electricity supply and energy efficiency in key sectors (transport, industry and buildings) are projected in the scenarios to rise by several hundred billion dollars per year before 2030. Within appropriate enabling environments, the private sector, along with the public sector, can play important roles in financing mitigation and adaptation” (goo.gl/b63SI9).

Developing countries are estimated to need $350 billion per year for mitigation, plus an additional $70-$100 billion per year for adaptation to climate change. In addition, if the impacts of climate change continue to mount, increased funding will be needed to deal with “losses and damage” of climate-related disasters, such as hurricanes, flooding, droughts, and the rising sea level.

Developed Countries have already committed to “jointly mobilize” $100 billion per year in climate finance for developing countries, including private funds leveraged by public resources, but there is still a lack of clarity that on whether and how this goal will be reached.

AILAC and other developing countries have suggested that the Paris Agreement needs to include:

a) A long-term, qualitative goal on means of implementation: “all investments are to progressively become low-emission and resilient to climate impacts, contributing to the necessary transformation towards sustainable development and the achievement of the goal of maintaining the average global temperature increase below 2 ºC or 1.5 ºC, as well as building economies, societies and ecosystems that are resilient to climate change” (from the negotiating text, http://goo.gl/JeuL68).

b) A “short-term collective quantified goalshall be determined every five years starting in 2020 on the basis of a floor of USD 100 billion per year, in order to enhance the predictability of the provision of climate finance, indicating specific levels of funding from public sources to be provided”.

c) “Each developed country Party and other Parties in a position to do so commit to communicate on an annual/biennial basis in the post-2020 period the scaled-up, quantified financial contribution they will provide to support developing countries in the effective implementation of mitigation and adaptation action, in the light of the transformational goal set forth in article above and the global goal set forth in article 5.3 above, which shall be considered and reviewed”.  This could build upon the experience of the Submissions on Strategies and Approaches to scale up climate finance, by including ex-ante information on funds to be provided.

d) Strengthen the Operating Entities of the Financial Mechanism of the Convention, including the Green Climate Fund (GCF), the Global Environment Facility (GEF) and the Adaptation Fund (AF).

e) Develop new carbon market mechanisms for trading certified emissions reductions (several of the INDCs include a component linked to a market mechanism).  This could build on the existing mechanism under the Kyoto Protocol; and include a levy for adaptation finance.

In conclusion, progress has been made through the presentation of the INDCs, but it will be necessary to achieve a Paris Agreement that ensures the environmental integrity and ambition of the commitments (up-front information, quantifiable targets, cycles with a common timeframe, accounting rules, ex-ante assessment and ex-post review, etc.).

(*) The views expressed in this article are the author’s and do not reflect the views of the AILAC Group or any of its member countries.