If there was one thing that made me be happy yesterday, Intergenerational equity was it.

And if we need to thank somebody, that somebody is the Independent Alliance of Latin America and the Caribbean (AILAC), a farsighted group of six countries (Chile, Colombia, Costa Rica, Guatemala, Panama and Peru) which share most of their strategies at UN climate talks. 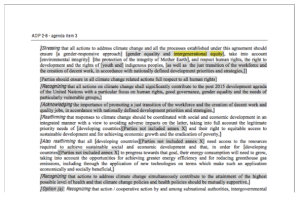 But let’s start from the beginning.

Intergenerational equity is the principle according to which our planet should be handed to future generations in no worse conditions than those we inherited it from, our ancestors. In other words, it recognizes the idea that current and future generations should be equivalently valued, ideas which were already acknowledged both in the UNFCCC Convention and in the Rio Declaration.

In 2013, a small number of young delegates to UNFCCC sessions concerned with the lack of ambition in protecting those who still are not able to claim their rights, decided to establish within YOUNGO (the Youth Constituency to the UNFCCC) the Intergenerational Equity working group.

The Group began by elaborating an official submission on behalf of YOUNGO to the Secretariat, encouraging the inclusion of the principle in the preamble of the 2015 agreement, as well as a few suggestions on how to operationalize it.

Later in the year, an increasing number of Group members (from now on “inteqqers”) started reaching out respective national delegates and international stakeholders to gain their support in pushing intergenerational equity in the text.

The inteqqers managed to meet authorities such as Connie Hedegaard and other members of the EU Commission. When it came to COP19, we (yes I am one of the Inteqqers) worked closely with Ahmad Alhendawi, UN Secretary General’s Special Envoy on Youth, whose support was critical in pursuing our first concrete result: an acknowledgment of future generations in the ADP preamble text of the Warsaw Outcomes.

But that’s not all: those ambitious youth delegates also wrote down the Warsaw Declaration on Intergenerational Equity and Climate Change, which was signed by over 60 countries.

Empowered by the growing number of supportive countries (AILAC, African Group, Dominican Republic to name a few) and by 2013’s achievements, the inteqqers decided to go bigger: in the lead up to COP20, we took the concept domestic, and started the Italian Youth Think Tank on Intergenerational Equity, and we have since delivered policy documents to a number of national and international institutions, and engaged in social change competitions in MIT in the US.

In Lima, we also organized an ad-hoc side event attended by over 70 people, and engaged key-negotiators to build the basis for the big step: getting intergenerational equity explicitly mentioned in the text of the future Paris agreement.

And that brings us here to Geneva.

Before this week, us Inteqqers drew up a few alternatives to paragraph 64-67 in the preamble of the “Elements for a draft negotiating text” which added a mention to the principle, and submitted the proposal to a few countries/party groupings, amongst which EU, India and AILAC.

Although there was no action from the firsts, AILAC became our champion by delivering the following statement during yesterday’s discussions on section A:

“AILAC is of the view that all of the necessary concepts are included in the preamble. However, we would like to see included the following language on human rights, by inserting a new paragraph:

‘Parties should ensure, in all climate change related actions, full respect of all human rights’

We note that there is a paragraph that already refers to human rights, but it is in middle of other concepts; our preference is for a stand-alone solely focused on the importance of human rights.

Additionally, for AILAC ensuring gender equality in the agreement is also very important, and for that reason we would like to replace the language of gender responsive approach with gender equality and intergenerational equity.

Today we were successful, but the match is still far from being won: we must ensure that language on intergenerational equity remains where it is, surviving to the streamlining process which should take over this afternoon.

We really hope more countries could be inspired by AILAC. If not for us, for future generations.