AILAC Communicates its Positions at the Launch of COP22

AILAC Communicates its Positions at the Launch of COP22 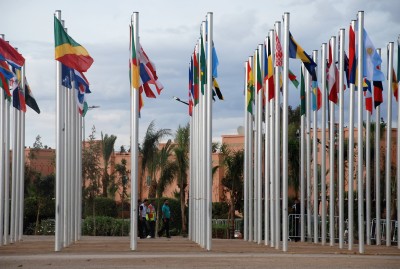 Marrakech, Morocco, 7 November 2016. For the Association of Latin America and the Caribbean (AILAC), the Climate Chance Summit in Marrakech, known as COP22, which starts today and will continue until 18 November, is a of special importance as it coincides with the entry into force of the Paris Agreement and the first Meeting of the Parties of the Agreement, scheduled for 15 November.

All of the AILAC countries are committed to the Agreement and its ratification. Costa Rica, Honduras, Panama, Paraguay and Peru have already ratified the treaty and the parliaments of Guatemala, Chile and Colombia are in the process.

As group, AILAC arrives at COP22 with clearly defined positions on areas considered key to successful implementation of the Paris Agreement, such as the strengthening of the Nationally Determined Contributions, or country commitments toward lowering their greenhouse gas emissions; the communication on efforts in adaptation to climate change; the framework of transparency in which these actions will be carried out; the means of implementation or support to the most vulnerable countries, which include climate finance; and the global stocktake of collective progress by all the nations toward compliance with the agreement’s long-term goals.

In particular, for AILAC, mobilization of means of support to developing countries, including AILAC nations, is vital. AILAC proposes transparent accounting of financial resources allocated to climate adaptation and mitigation, development and transfer of technology, capacity building, the transparency framework and other activities responding to the needs and priorities of developing countries.

AILAC considers the pace must be stepped up in developing new technologies, including those that are endogenous or developed by each country. The objective is to increase the effectiveness of innovation for economic growth and sustainable development and to strengthen transfer of technology that can be replicated, respects human rights, and promotes gender equity and cultural exchange.